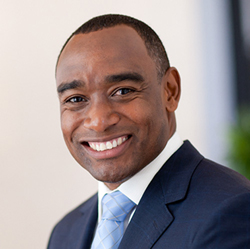 ​Jermaine A. Lee is a trial lawyer who has tried numerous jury and non-jury cases. He has broad experience handling business and tort claims in federal and state trial courts, appellate courts, and in arbitration proceedings.

Prior to forming the law firm, Mr. Lee practiced as a trial lawyer with Shook, Hardy & Bacon and Cozen O’Connor, both international law firms, and Bilzin Sumberg, a well-respected Miami firm, where he represented clients in a variety of business and tort matters, including a well-known professional basketball athlete in a trial involving certain partnership agreements, the use of the athlete’s name, image and likeness and damages in excess of $100 million, the President of an African country in a dispute involving the use and damages to a Presidential aircraft, and a power company in a trial involving polluted land and damages in excess of $90 million.

Mr. Lee has been repeatedly recognized in the Super Lawyer’s Publication.

During law school, Mr. Lee worked for Justice Peggy Quince of the Florida Supreme Court and with a national law firm. He also received the Florida Association of Criminal Defense Lawyers Award in connection with his trial work in a second-degree murder trial.

Prior to becoming a trial lawyer, Mr. Lee practiced as a Certified Public Accountant at PricewaterhouseCoopers, LLP, a national accounting and professional services firm. While at PricewaterhouseCoopers, LLP, Mr. Lee focused his practice on tax consulting services, which included, among other things, implementing tax strategies and preparing the tax disclosure in the audited financial statements of private and publicly traded companies.

Represented a bank customer in a lawsuit stemming from a former bank employee’s theft of the customer’s confidential information to commit fraud and money laundering. Reached a confidential settlement before trial.

Secured a $2.2 million verdict in a three-week federal trial against companies that failed to provide promised services regarding the operation, repair, and maintenance of the airplane of the President of the Democratic Republic of the Congo.

Represented a well-known professional basketball player in a trial in state court and before a panel of the American Arbitration Association in matters involving certain partnership agreements and the use of the athlete’s name, image and likeness to promote certain business ventures.

Represented a Florida energy company in a trial involving alleged environmental contamination to lands in Aventura, Florida, and the impact of the alleged contamination on a developer’s ability to successfully and timely develop a residential project.

Represented a condominium association in a trial in state court involving alleged injuries suffered by a former tenant on the premises.

Represented a national telecom company in a trial in state court involving the alleged theft of trade secrets.

Represented a real estate broker in a trial in state court relating to a dispute with a condominium developer.

Represented an owner of a commercial center in various disputes involving commercial tenants.

United States District Court for the Southern District of Florida

United States District Court for the Middle District of Florida

Hernandez Lee Martinez, LLC
9190 Biscayne Boulevard, Suite 204
Miami Shores, FL 33138
(305) 842-2100
(305) 842-2105 fax
info@hlmlegal.com
The information you obtain at this site is not, nor is it intended to be, legal advice. You should consult an attorney for advice regarding your individual situation. We invite you to contact us and welcome your calls, letters and electronic mail. Contacting us does not create an attorney-client relationship. Please do not send any confidential information to us until such time as an attorney-client relationship has been established.